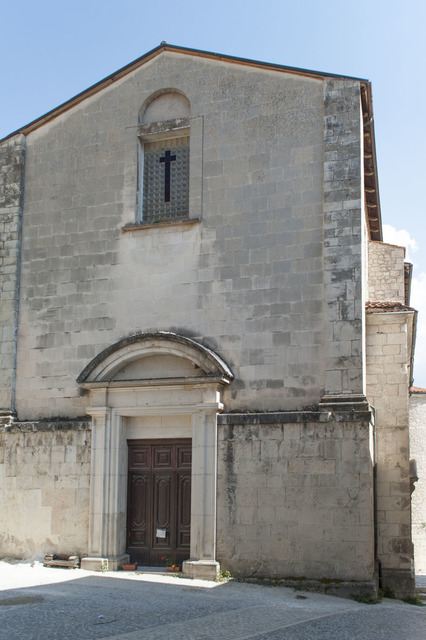 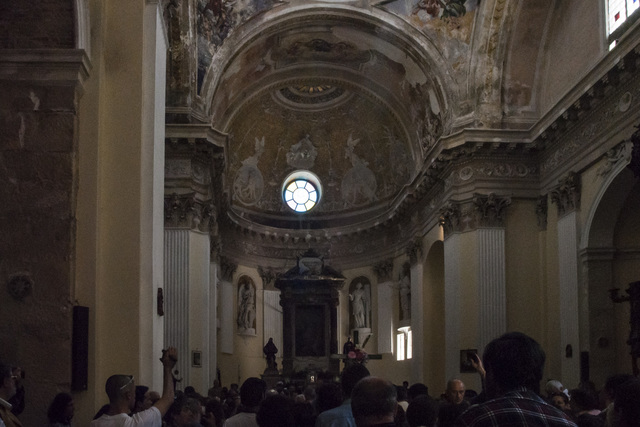 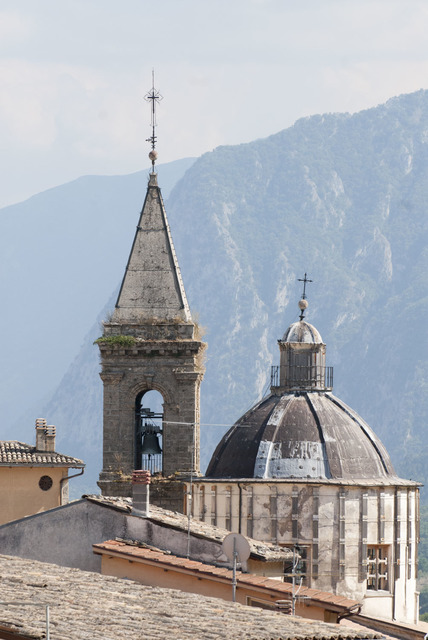 Hours: Closed since the earthquake of 2009

On the site which since the 14th century had been occupied by a small church dedicated to Saint Egidio, since the 17th century there has been a church dedicated to San Domenico. The structure of the current sacred building, however, dates back only to the late 19th century and the beginning of the 20th as the work was only begun in 1865.  During this period, the old building was demolished and an almost entirely new building was started. Because of economic and structural problems, much of the dome was demolished in 1902,  restructured and re-decorated, so as a result the construction work suffered from delays. Damaged in the earthquake of 1984 and then subsequently restored, it is  today closed for worship due to damage from the earthquake in 2009. Within the sanctuary there are no visible traces of previous phases of construction, except for the side portal dating from the 18th century.
The feast of the titular saint, which for a long time was held on the first Thursday in May, has for some years now been held on the 1st day of the month. Thousands of pilgrims, curious tourists and even scholars visit the shrine on this occasion, attracted by the special procession in which the statue of San Domenico is adorned with snakes for propitiatory purposes. The statue is being kept temporarily in the church of La Madonna delle Grazie, which is currently part of the procession.

The facade is made of stone blocks from the early 20th century and has a high plinth, It is enclosed at the sides by two pilasters that reach up to the sloping roof. At the centre, the lintel of the stone doorway with a carved frame, has on either side a pair of pilasters supporting a smooth frieze. Above it is a lunette with a low profile and in alignment there is a rectangular window closed by a blind semi-circular arch. The precious 18th century doorway - today located along the right-hand side of the building and used as a side entrance - has a shaped stone frame decorated with pilasters and a lintel carved with floral motifs. It ends with a broken pediment supported by pairs of ledges. In the centre is a minor tympanum with a cross. The wooden doors, coffered and carved, are unfortunately in poor condition. The dome on a high cylindrical drum - crowned by a lantern - and the pointed bell tower date back to the early decades of the 20th century.

The single nave ends with a semicircular apse which is covered by a dome decorated with painted stucco. At the centre is the high altar and on the wall behind it niches with statues and fluted pilasters alternate with composite capitals, which also decorate the perimeter walls. On the right-hand side of the room is a richly carved wooden pulpit and on the left is the chapel dedicated to the patron saint of the church. The statue of the saint used to be kept in the niche above the refectory. The altar has two openings which lead into a small cave, from which the faithful at one time took the blessed earth which they then scattered in the fields to protect them from damage. In the same chapel there is also the bell that the faithful pull with their teeth to relieve pain. The whole ritual today takes place in the church of La Madonna delle Grazie