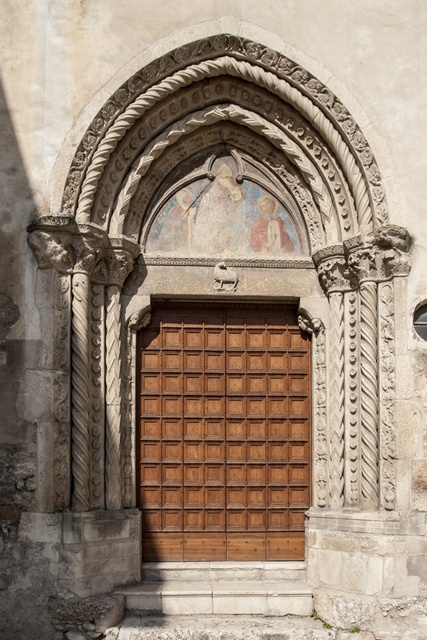 Hours: Opening entrusted to volunteers when available. Sunday Mass 11.30 am

Built in the 11th century, the parish church is dedicated to San Marcello, patron saint of the village. It has undergone several changes over the centuries, as can be seen by its irregular facade, unusual floor plan and the presence of different styles. Enlarged and embellished in the second half of the 15th century by the Procida family - Lords of Anversa - the church underwent further restoration in 1803, when part of the facade was demolished and the bell tower was rebuilt plus some changes inside. The vaulted roof collapsed in the Marsica earthquake of 1915 and was replaced by wooden trusses.


The facade is characterised by the splayed portal of late Gothic style, built in the second half of the 15th century by Count Nicolo Di Procida, whose coat of arms is carved into the top of the arch. In the door frame the spiral columns alternate with those decorated with plant motifs. The external columns feature vine leaves while the internal ones have acanthus leaves. The capitals are carved with birds and phytomorphic elements typical of the school of Abruzzo: acanthus leaves on the left and flowers in relief on the right. The posts end with lion heads, while the ledges of the architrave rest upon the heads of two youths. The same decoration continues inside the pointed trefoil lunette, with a fresco from the same period by an unknown author. It is of an international Gothic style, depicting the Madonna and Child, who holds a bird in his right hand as a symbol of the redeemed, between the Saints Pope Marcello and Vincent the Martyr. On the lintel is a relief lamb crucifer and on the right the date 1472. The coffered elder-wood door, with two smaller central doors, was the work of master Nicola of Sulmona from 1469. It was recently replaced by a copy with the original placed inside the church for conservation reasons.
Much altered over time, and with an irregular configuration, the rectangular interior has a principal nave and an aisle on the left-hand side which is markedly smaller. They are separated by cruciform pillars on which rest one pointed arch and one round arch. Starting from the central pillar is a transverse arch which divides the aisle into two bays of different sizes. In the lower bay is the sacristy which houses a small 18th century altarpiece depicting San Marcello. On the right-hand wall, near the entrance, there are remains of what was probably an ancient chapel with fragments of 15th century frescoes depicting St. Catherine of Alexandria, St. Anthony Abbot and an unidentifiable seated figure, commissioned by Paolo di Bartolomeo, as is stated in the fragmentary inscription in Gothic script. The saint, with a green robe and a red cloak, is holding in her right hand the palm of martyrdom and the wheel - the symbol of her torture. Beside her, on the back wall, is Saint Antony Abbot with a long beard and in his right hand the hermit’s stick with a bell that he used to cast out the demon. On the floor of the chapel, which is decorated by a portico from which only a pillar remains, there is a tombstone from 1624 with the coat of arms of the Piccus family.