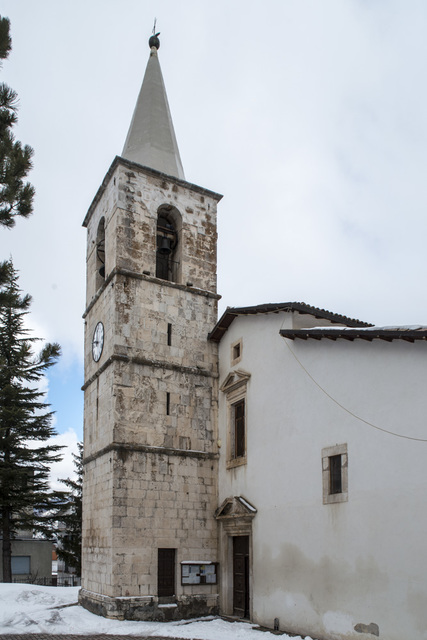 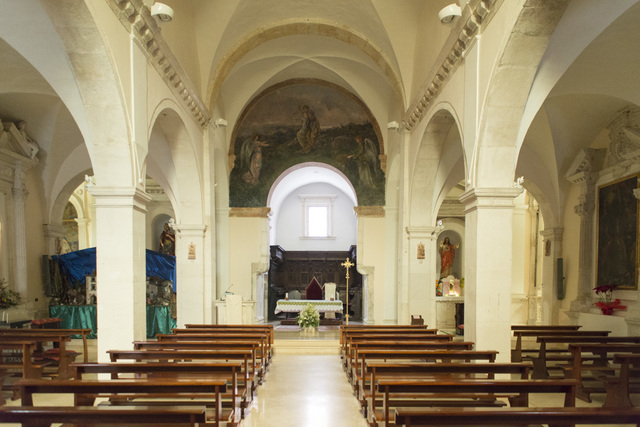 The origins of the church of Sant’Eustachio are uncertain. According to tradition, it was built on the ruins of a pagan temple dedicated to Jupiter. Confirmation of this theory could be provided by the remains, probably from the Roman era, which were found during the restoration work carried out by the Superintendence between 1949 and 1950.
The first documentary sources that testify to its existence however only date back to the 12th century. The present church is the result of the restructuring which was carried out following the earthquake of 1706, which did not compromise the look of the church from the 16th and 17th centuries which we can still see today.
The facade has a sloping roof-line, with a central rectangular portal topped with a broken pediment. This decoration is repeated in the window above, which is also rectangular. On either side of the main portal there are two other entrances. At a difficult angle on the left-hand side adjacent to the facade, stands the 16th-century bell tower made of stone.
The interior has three naves with a transept and a rectangular choir. The nave is enhanced by a stone entablature with ledges. The aisles are adorned with stone altars built between the late 16th and the early years of the 17th century. In the transept is the 16th century altar dedicated to Our Lady of the Rosary; at the centre of which is a canvas oil painting from 1578, depicting the Madonna offering the rosary to St. Dominic and St. Catherine of Siena. Near the entrance is a small stone baptismal font dating from 1587, most likely to have been the work of local artisans. Of note is the wooden choir made up of thirteen stalls with finely carved arms and backs. The attribution of the choir is uncertain: it could be the work of the artist Pecorari from Rivisondoli (16th to 18th century) or of Paolo Balcone, son of Bartolomeo who built the choir of the SS. Annunziata in Sulmona in 1577. Most probably it was completed by the skilled local workers who were operating in the area between Sulmona and Pescocostanzo.